Although a tropical cyclone is the most likely reason for an evacuation of coastal counties in Florida, a release of Hazardous Materials or an approaching Wildfire might also trigger an evacuation. The decision to issue an evacuation order is not taken lightly, nor is the disruption it creates for the entire community; evacuations are ordered to protect the lives, health, and safety of the public.

If an evacuation order is given:  Gather your family, pets, and supplies; Secure your home; and Go!  Tropical Cyclones may provide a little leeway time, but other hazards can be immediately life-threatening.  If you haven't already, sign up now for the Alert Nassau Citizen Alerts so you and your family will know when you are in danger, regardless of the hazard!

During Hurricane Season (June 1 through November 30) it might still look beautiful outdoors when an evacuation order is issued.  The EM Director, Executive Policy Group, and BOCC will time evacuation orders so that everyone has time to get away safely.  Remember that Amelia is a barrier island.  If a tropical cyclone impact is imminent, residents, visitors, businesses, police, firefighters, and even hospital patients will all have to cross the bridge to move inland before the destructive high winds, dangerous storm surge, and flooding rains arrive.  Once sustained winds reach 39 mph, bridges will be closed for safety, so evacuation of the island must already be complete.

Thousands of computer simulations depicting Sea, Lake, and Overland Surge from Hurricanes (SLOSH Models) were analyzed to determine the areas of Nassau County most likely to be inundated during a tropical cyclone.  Depending on the scenario (i.e. Storm Category, Forward Speed, Direction, Ground Saturation), water depths all over the county could reach from a few inches to over 25 feet; surge can cause flooding well into our river basins, not just at the coast.  These data were combined with landscape features, population density, and road access to generate our public safety Evacuation Zones.  (To get information about the National Flood Insurance Program and NFIP discounts for Nassau County residents, see our Flood Insurance Page)  Everyone in an Evacuation Zone should designate a safe alternate location well before it's needed.  Plan what you will take and know how long it will take you to get there.  For help planning, read and heed our Citizen's Disaster Preparedness Guide.  If a tropical cyclone approaches, residents in mobile homes and those who are electricity-dependent or have special medical needs should plan to evacuate to a safe place out of the area, even if not in a designated Evacuation Zone.  High winds and tornadoes associated with tropical cyclones are much more likely to damage mobile homes; electric power and certain medical services may be unavailable for days or weeks after impact. 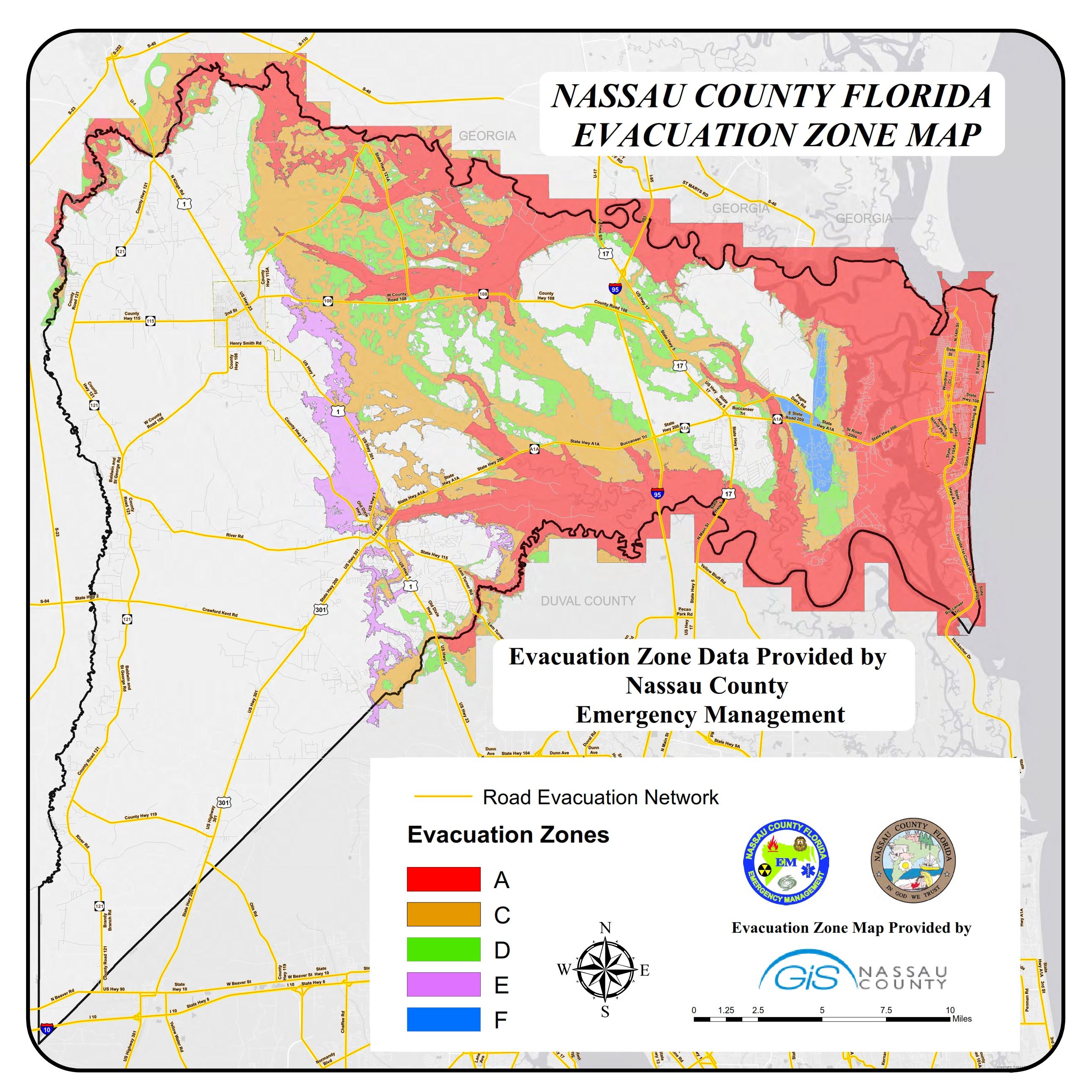 The map above depicts our different zones by color.  There is no "B" zone on the map; Zones A and B have been combined because of the minuscule difference in inundation potential and because the B Zones were often surrounded by land designated Zone A.  Evacuation Zones are not the same as FEMA Flood Zones.  Evacuation Zones take into consideration the likelihood for impact from storms, water accumulation, ocean surge, river basins, and public safety access (we don't want anyone driving through water that covers a road).  Just know that evacuations ordered for a tropical cyclone will be by Evacuation Zone letter and ALL residents of mobile-home/trailers should evacuate regardless of their Zone!

To see exactly where your address appears with the Evacuation Zones overlay on the Property Appraiser's detailed Nassau County Map, go to the maps website, click on "Map Layers" at the top of the page, check the Public Safety box and the Evacuation Zones box in the menu that pops up, then use the "Search By" feature to select "Address" and enter your street address.